Find BCETMB exam resources to help you become board certified as a massage therapist, such as BCETMB practice tests with sample massage questions, massage licensing information, study guides, flash cards, courses and more. The exam is offered by the National Certification Board for Therapeutic Massage and Bodywork (NCBTMB).

The NCBTMB was founded in 1992 as a nonprofit organization to establish a minimum level of competency for the massage therapy profession. The NCBTMB was accredited by the National Organization for Competency Assurance in 1993 and maintains the certification to this day.  The accreditation assures that the NCBTMB’s testing is conducted under strict standards of compliance and fairness.  The NCBTMB originally offered their National Certification Exam for Therapeutic Massage and Bodywork (NCETMB) as a written exam requirement for state licensure.  In January of 2013, the NCBTMB began offering the BCETMB and had phased out the NCETMB by November 1st of 2014. The National Certification will officially expire and will no longer be valid after December 31st, 2016.

The exam is comprised of 160 multiple choice questions which must be completed within the 2 hour and 40-minute allotment of time.  The NCBTMB scores each question differently such that some questions possess a higher score potential than others. 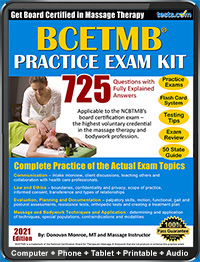 Quality starts with who wrote the material.
Our practice exam writer
s
:
Donovan Monroe
is a massage instructor who teaches advanced therapy techniques and continuing education courses in Portland, Oregon. He has more than 17 years of professional experience in the field of massage therapy. Donovan is a publications director and editor for the Oregon Massage Therapists Association and was recently a BETA tester for the new BCETMB exam. Donovan passed the NCETMB exam.

The BCETMB consists of 160 questions. The topics tested include: