Untreated sexually transmitted diseases can lead to a host of serious outcomes ranging from infertility to death. STDs, including herpes, HPV, syphilis, gonorrhea and Chlamydia, also are highly contagious, putting a person’s sexual partners at an increased risk for disease as well. It is important for anyone who suspects they may have an STD to be tested in order to protect their health as well as the well-being of their partners.

Caused by the herpes simplex virus (HSV), herpes is a sexually transmitted disease associated with genital sores. According to the Centers for Disease Control, at least 45 million Americans over the age of 12 have been infected with the herpes virus. There is no cure for herpes, and after infection, the virus stays in the body for life.

A herpes test, which detects the presence of HSV, can be conducted either on a sample of fluid from a sore or from a blood sample.

The viral culture, which is one herpes test that uses fluid from a sore, is the best method for detecting the herpes virus. The fluid, which can be taken from the vagina, cervix, penis, urethra, eye, throat or skin, is collected with a cotton swab and placed in a cell culture. Ideally, the sample will be collected from a sore that is just a few days old, because new sores are more likely to contain the virus.

If HSV is present and infects the cells in the culture, those changes will be visible under a microscope. A sample of fluid from a sore can be collected at the doctor’s office and sent to a lab for evaluation. Home herpes tests are available. With these, a patient can take his or her own sample and send it to a provider for processing.

Depending on the analysis method used, viral culture results can be available anywhere from 24 hours to two weeks later.

The blood test for herpes looks for the antibodies that the immune system creates to fight off the herpes virus. However, the antibody test is less precise than the viral culture. The presence of herpes antibodies may indicate a past infection rather than a current one, for example, or in case of a recent infection, the antibodies may not yet be present.

A regular blood draw can be used for the herpes blood test, and no special preparations or precautions are necessary. The risks are minimal, although minor bruising may occur at the site of the blood draw. People with bleeding disorders or on blood thinners should notify their physicians before taking a blood test.

There are approximately 100 strains of the human papilloma virus, or HPV, and around 30 of them are transmitted sexually. While some strains cause visible warts, others are asymptomatic and many people do not even realize they have an HPV infection.

Most strains of HPV go away on their own, but a handful are more dangerous and warrant special attention. Those high-risk strains can lead to cervical cancer, and two of them, HPV-16 and HPV-18 are responsible for 70 percent of all cervical cancer cases, according to the American Cancer Society.

Early HPV detection can save a woman’s life. Physicians recommend that all women over the age of 30 get an HPV test every year because that demographic faces the highest risk of cervical cancer. However, HPV testing is only a routine procedure when a woman’s pap smear results are inconclusive. Therefore, women over 30 should specifically ask their gynecologists for the HPV test at their annual exam.

The HPV test, which identifies HPV DNA, can be done on a pap smear sample collected in a doctor's office or clinic. HPV test results are generally available in one to two weeks, and a positive result may lead a health professional to recommend follow-up testing, such as a colposcopy or biopsy, or another HPV test a few months later.

Syphilis is dangerous: an untreated syphilis infection can spread throughout the bodyand lead to brain damage, blindness and even death. The disease is also on the rise. The Centers for Disease Control saw nearly a 20 percent increase in syphilis cases between 2006 and 2007, the most recent year for which statistics are available.

Because pregnant women can transmit syphilis to their unborn children, all expectant mothers should be screened for syphilis early in pregnancy. In some states, a couple must take syphilis tests before they can obtain a marriage license.

The most recognizable early symptom of syphilis is the open sore known as a chancre that appears where the syphilis first entered the body, generally in the genital area, mouth or anus. A syphilis test can be conducted on fluid from a chancre, blood, skin tissue or spinal fluid.

In order to get a fluid sample, a health professional will gently press on a chancre and collect the fluid that comes out. A sample can also be taken from the skin by swabbing the area of a rash.

In cases of samples from the chancre fluid or the skin, the specimen is examined using a special tool called a dark-field microscope, in order to identify the syphilis-causing bacteria.

A blood sample drawn from a vein can also be used for syphilis testing. In this case, the lab will check the blood sample for antibodies that are generated in response to the syphilis bacteria. A minimal risk of bruising is associated with blood draws, and people with bleeding disorders should check with their physicians prior to having blood drawn.

In advanced syphilis cases in which the nervous system is affected, a cerebrospinal fluid syphilis test may be needed to determine how far the disease has progressed. A health professional will use a spinal tap obtain a sample for this test, inserting a needle into the patient’s lower back and withdrawing fluid from the spinal canal.

Syphilis test results are typically available within one week to 10 days. There is not yet an FDA-approved home syphilis test.

Health care professionals are legally required to report cases of gonorrhea, and according to the Centers for Disease Control, gonorrhea is the second most common reportable disease in the United States. In 2007, 355,991 cases were reported throughout the country.

The most common gonorrhea symptoms in both men and women are an itching or burning sensation, especially during urination, and unusual discharge from the affected area.

Women between the ages of 15 and 24 have the highest rates of the disease, and women face the most serious consequences from untreated gonorrhea, which can leave them unable to have children.

If a sample of body fluid is being used, the health professional will take it from the affected area, which could be the urethra, cervix, rectum or eye. A urine sample can also be collected at home and sent to a private laboratory for evaluation.

The risks associated with having a fluid sample taken are low. Women may experience minor vaginal bleeding if a sample is collected from the cervix. A person may also experience sudden dizziness or fainting because of fear or pain when the swab is inserted into the urethra, although this is rare.

Chlamydia is the most common sexually transmitted bacterial disease in the United States. It also often goes unnoticed because three-quarters of infected women and half of all infected men exhibit no symptoms. However, it comes with serious consequences, especially in women, who can develop pelvic inflammatory disease when Chlamydia goes untreated.

Because Chlamydia is so common, the American College of Obstetricians and Gynecologist recommend that all sexually active adolescents and young women age 25 and younger get a Chlamydia test. Chlamydia can be passed from mother to child during childbirth, so it is recommended that pregnant women be tested for Chlamydia as well.

Most tests use a sample of body fluid from the affected area, generally the cervix, urethra, rectum, or eye, although a urine specimen may also be used for a Chlamydia test. For a urine test, the sample may either be collected in a doctor’s office or health clinic or at home then sent to a laboratory for evaluation.

Results from a Chlamydia test using a urine specimen typically are available within 24-72 hours.

If you feel that you have an STD or may have been exposed to one and are in need of an STD test, please visit our STD Test Directory. For more on STD tests, read our interview with Tracey Powell, STD test expert. 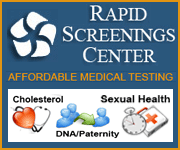 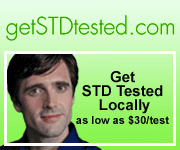